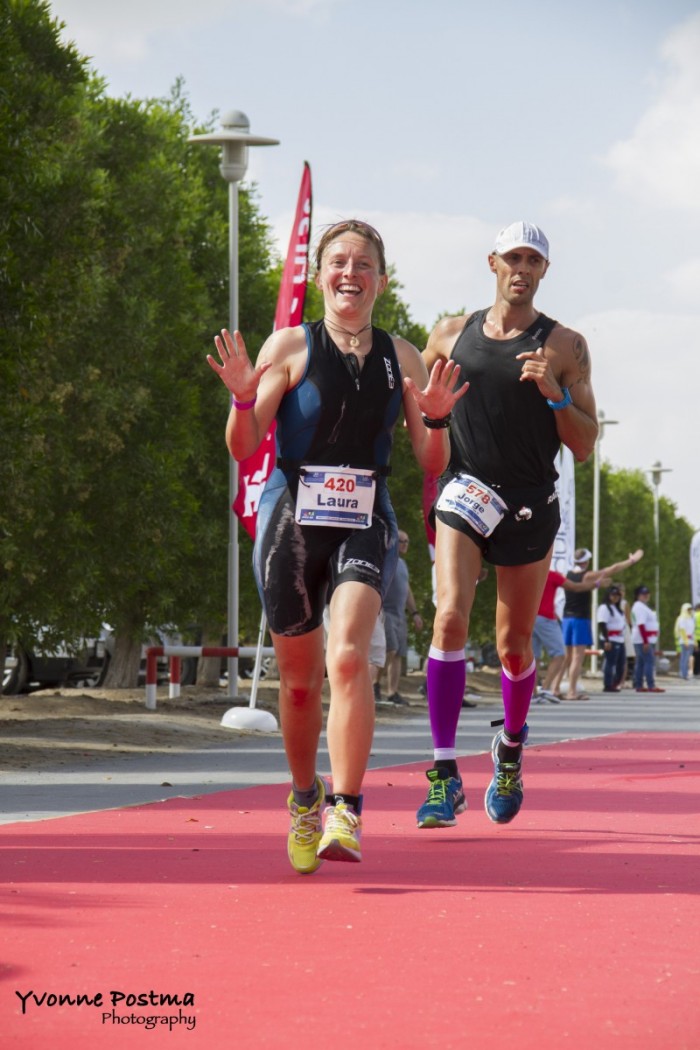 “My biggest achievement in the 6 months working with Heidi is probably feeling more content with who I am as a person. Yes I completed a half ironman and yes I’ve lost over 10kg to date, but for me my perspective on how to approach life choices is the key to any other successes I’ve achieved.”

This is Laura’s story…

“After 2 years in Doha I made the move to Dubai, late August 2014. I wasn’t unhappy as such but the move wasn’t entirely through choice and I was leaving a partner and group of very good friends in Qatar. Initially I wasn’t in a great headspace on arriving in Dubai, mainly due to the way I had been treated by colleagues and pupils in my job in Doha, but also because I felt I was missing so much having been very involved in the rugby club there. I spent my first 5 or 6 months trying to get to grips with the demands of my new employer, as well as making trips back a forth to Doha every few weeks, leaving little time for me to spend on myself. Having given up rugby, I still did a bit of exercise, swimming 3 times a week, however I wouldn’t say I was in any majorly fit condition. Meeting Heidi through work I joined the weekly running club which was my first wake up call to how unfit I was; before I left Scotland in 2012 was regularly swimming, cycling and running and taking part in local triathlons.

I always thought I ate reasonably healthy until I started the “Biggest Loser” competition the PE department at my school started up in April, to encourage staff to lose some weight in the lead up to the summer. I decided to take part to help give myself some motivation to cut down and exercise a bit more. I am quite a determined person and given a goal I will focus all my energy on trying to achieve it. After 2 weeks I had lost a couple of kilos however I was struggling to find variety and ideas of things to eat; I was getting bored with homemade soup, rice cakes, chicken, salads and vegetables. I had also at this point decided to get back into cycling, hiring bikes at Al Qudra on the weekend, and after competing in a local Aquathlon, was considering getting back into triathlons. So with a view to make changes to my lifestyle through both eating and exercise I approached Heidi to see if she could help. She offered me a coaching opportunity focussing on eating right but also eating to fuel the types of training I was doing.

My initial thoughts of health coaching? Well to be honest being someone who has always just muddled through even when at times in my life I have got myself into a rut, I have always found the strength somewhere to eventually get myself back on track. I say ‘eventually’ as at times I probably could have done with help in hindsight, but would never have thought to seek it out. I didn’t see myself as someone who “needed’ to be coached, however following my own diet plan and generally trying to make time for myself and training wasn’t as productive as I’d have liked. I began to realise my body wasn’t necessarily responding the same as it was 5/6 years ago when I used to eat semi-healthy but with lots of treats and sweet foods I enjoyed. I believed that since I was doing a 30K cycle or 5K run or 2-3K swim the next day “I’d burn it all off”! I was a little apprehensive to start, as parting cash to do something like this that you are unsure what to expect or even if you are going to get any results is pretty daunting. I was also at the beginning worried about being judged, especially when you fill in the questionnaires about your lifestyle and eating habits. On saying that Heidi’s personable nature and approachability soon made any anxieties disappear.

Laura at the start of her health journey

One of the first major changes I made was cutting down on processed foods and sugars. I used to drink one can of full fat coke every day; I rarely touch a can of fizzy drink these days unless it’s a can of club soda which I tend to squeeze a bit fresh lime in for flavour. Cutting out the sugars, eating home cooked meals which included lots of fresh greens saw my weight continue to drop. Heidi was providing me with alternatives in the form of 70%+ dark Chocolate, bliss balls, protein cookies and brownie recipes that curbed any sweet cravings I had. Being introduced to good carbs in the form of buckwheat, my new favourite grain (coming from someone who loves her porridge!) and also quinoa has opened the doors to me trying lots of tasty recipes. Before I would have walked past these things in the supermarket not knowing what to do with them. The recipes and the planning of what to eat and when with regard to training is a major change to my lifestyle as I now think ahead more about the exercise I have just done or will be doing and what the best foods are to fuel or repair my muscles. I also kept a daily food diary which I used to discuss with Heidi at our fortnightly meetings. As well as looking at the types of food I was eating I was also able to track my moods or feelings along with this to gauge whether I was providing my body with the right training energy.

All of the food changes along with my increased exercise regime which eventually resulted in the purchase of my own bike (one of my goals!), saw me continue to lose weight and gain more energy for life. I started to develop more confidence in myself and then came the discussion with Heidi’s husband…”Let’s do DIT!” At the time I was on a high, I was getting fit again, I had rediscovered my love of cycling and with that had meet some fabulous ladies through the Vixens. My swimming was getting stronger and is probably the best it’s ever been thanks to Julian and the other fabulous coaches at Hamilton Aquatics. I was even getting better at running, definitely my weakest discipline when it comes to triathlons. Was I crazy to even be thinking about DIT? I had only been back on a road bike for three months and it had been five years since I had completed a triathlon and that was only an Olympic distance. I was actually thinking and talking about taking part in a half ironman distance triathlon! Too late. it was down on paper, it was a goal I had set myself and anyone who knows me at all will know as soon as I’ve said I’ll do something…I do it! So from June/July I had to step it up a gear; I had to plan cycling/swimming/running along with a healthy eating plan around first the extreme Dubai summer heat and then come September around the manic school work schedule.

Everything was going well until around the start of October. I had to say goodbye to my partner who had to go back to New Zealand, then illness struck…I had laryngitis and a bronchial infection! As anyone who is reasonably active will understand this was horrible. I couldn’t exercise, I had no energy and I had my first triathlon in five years coming up in the form of the Mamzar Tri. I must have missed around two weeks of training before I felt fit enough to do anything. Heidi assured me that the resting would have done my body good. I hadn’t actually signed up for DIT at this point as I wanted to wait till nearer the time in case of any injury etc, so the Mamzar Tri was my tester to see if I could still do a triathlon! I completed it in under 3 hours which was my aim and I felt a bit more confident about signing up for DIT. The next two weeks I spent doing some steady training in preparation for DIT and after much anticipation the 14th November finally arrived, unfortunately with some windy conditions! A choppy 1.9K (or 2.1K according to my GARMIN!) swim, but happy to keep my time to under 35min saw me swiftly move through transition onto the bike. Now having done most of my cycling in the Highlands of Scotland I should really be used to a bit of wind however hitting the back straight at Al Qudra to be faced with a headwind after each turn definitely competes with some of the windy days I’ve seen in Caithness. Bike done, all I had to do now was run a half marathon! Having only done one half marathon before and due to taking ill so unable to build on my run training how I wanted, this was the bit I was most worried about. I shouldn’t have felt worried though; off the bike I felt strong, ran my own race and manage to complete the run in around 2 hours 15, I was delighted with myself. Another goal achieved!

My biggest achievement in the 6 months working with Heidi is probably feeling more content with who I am as a person. Yes I completed a half ironman and yes I’ve lost over 10kg to date, but for me my perspective on how to approach life choices is the key to any other successes I’ve achieved. I am more confident in knowing what I want and how to control my feelings being less irritable even when stimuli like hunger or fatigue would normally emphasise this. Although my goals themselves didn’t change the way I prioritised them over the 6 months did. Heidi in her coaching capacity was always there to help me guide myself through any problems. The best part of the 6 months would be discovering all the healthy alternatives and trying recipes with the all the new ingredients I’ve been introduced to.

“Although my goals themselves didn’t change the way I prioritised them over the 6 months did. Heidi in her coaching capacity was always there to help me guide myself through any problems.”

What does the future hold? I hope to continue exploration with recipes and healthy super foods, as well as maintaining my fitness by still swimming, cycling and running regularly. I can now confidently say I am a healthy person and I wouldn’t want that to change!”

Laura smashing her Half Marathon PB after a 1.8k swim and 92k cycle!

Are you inspired by Laura’s success story? Take the next step and get in touch by emailing me at heidi@heidijonescoaching.com I would love to hear from you

How to take the best bits of your holiday home

7 ways to enrich your summer

I can’t get enough of these summer Monday mornin

Tip for keeping up with your training during the h

Reflecting on the past month and the precious time