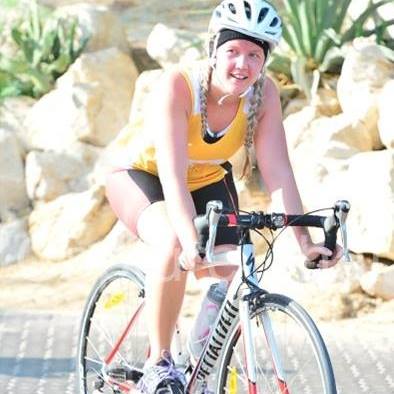 “I have accomplished so many things in the last six months that when I think about them individually I find it quite difficult to comprehend, that being said, one thing really does stand out above the rest. My biggest achievement to date was definitely competing in my first Triathlon.”

This is Gina’s story…

“Although I have lived here in The Sandpit for over three years now, this is the first time I have really embraced ‘life outdoors’. I have made several tentative steps into the gym before and, at one point in the not so distant past, did attend regular classes…but I wasn’t what you would call a ‘gym goer’; more a ‘sit-around-the-gym-pool goer’ and honestly, when I did go to the gym, I hated it.

I found it dull, time-consuming and in parts, intimidating.

That was until February this year. A one time Miss Slinky (yes, I know), I had fallen off the Slimming World wagon and had piled on the festive pounds; I was busy at work and I had been out of the gym for over six months with a back injury. I was making excuses for myself. Again.

I don’t really know what kicked my arse into gear. It’s true that there’s a lot of pressure to ‘look good’ out here; to be slim, bronzed and perfectly coifed at all times but I don’t usually buy in to the norm so I don’t think it was it. Whatever it was, I am eternally grateful for it.

I met Heidi at her running club some of my friends had joined. She wasn’t fazed by my tortoise pace, continuous questions or puce running face and encouraged me so much that I decided, actually, contrary to what I had thought for years, running wasn’t too bad after all!

I have accomplished so many things in the last six months that when I think about them individually I find it quite difficult to comprehend, that being said, one thing really does stand out above the rest. My biggest achievement to date was definitely competing in my first Triathlon.

Given that I couldn’t ride a bike six months ago (true story, ask my Mam), getting on a road bike at Al Quadra track in itself was quite a feat. But, get on one, albeit shakily, I did…then I started cycling at the Autodrome once a week and before I knew it, I had befriended the wonderful Velo Vixens and bought my own bike. I’m telling you, new woman…

On the 17th Of September all of my hard work paid off. My parents flew out to surprise me and cheer me on through my race. And it really did feel like my race; I had worked so hard for this, and I had so much to prove…if only to myself.

I had competed in a triathlon. Me; Little Legs. I could hardly believe it!

I was so damn proud of myself I almost cried…almost. From that point on I knew there was no going back; I was a Triathlete. It still makes me laugh to say that but that makes it no less true.

These days, I cycle, run and swim alone and with organized groups. I go to the gym almost daily and walk in the weights room like I own the place because now I know I belong there.

My fitness journey is far from over, I am still learning; I push myself to try new things and not be afraid to fail because now I know that anything is possible.

If you had met me back in February, you might not recognize the person I am now. There have been some physical changes, sure, but there is so much more than that. I am inspired to try harder, motivated to go further…I know it’s all starting to sound a bit clichéd but every bit of it is true and I can’t wait to see where I will be in another six months time.”

Are you inspired by Gina’s success story? Take the next step and get in touch by emailing me at heidi@heidijonescoaching.com I would love to hear from you

Can’t seem to start ANYTHING? You need to read this

Calling all perfectionists: A magic formula for consistency

How to take the best bits of your holiday home

🏔 Trails - Chamonix 🏔 A beautiful view from

👉🏻Do you relate? Are you feeling the urge